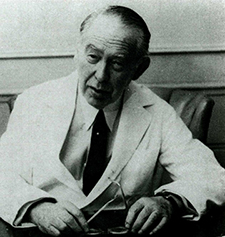 "Dr. Siegfried Thannhauser was a brilliant clinician and stimulating teacher who was popular with students, house officers, and faculty. He was also considered to be a world authority on diseases of fat metabolism." [1]

Dr. Thannhauser is repsonsible for publishing "new discoveries about purine metabolism and established his still largely valid theory of the pathogenesis of gout as a kidney-associated secretion disturbance of uric acid. He described new fundamental elements of nucleic acids, contributed to knowledge about their biochemical structure, and developed the glucose tolerance test for diagnostics of diabetes mellitus. Thannhauser's career ended when the National Socialists seized power in 1933....[In] 1935, he was invited by Joseph Pratt to work at the Boston Dispensary." [2]

Learn more about Dr. Thannhauser in Century of Excellence.