This guide has been created to help you learn more about Tufts University's archival materials regarding those physicians who fled Nazi Germany to become distinguished faculty members at Tufts School of Medicine. The materials in this guide pertain to:

This guide contains links to archival materials as well as photographic images that originally appeared in the Tufts Medical Alumni Bulletin. Full-text of articles that have appeared in Tufts publications may be obtained via the Hirsh Health Sciences Library. These materials appear courtesy of Tufts University.

About German Emigré Physicians at Tufts 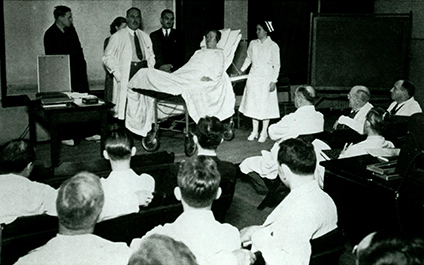 "Before the Nazis seized power in the early months of 1933, Germany was at the forefront of science and medicine, and Jewish scientists and physicians, who contributed prominently to that status, seemed secure in their professional careers and, to a large extent, in their personal lives. As primary targets of Hitler’s onslaught, however, Jews soon found their world and assumptions turned upside down. By April of that year, nearly all were dismissed from academic and civil service positions. Though the magnitude of the coming disaster was still unimaginable even during increasingly harsh persecution of the next several years, many Jews and anti-Nazi non-Jews came to realize that they could not continue to live in Germany. With growing desperation, they sought paths to survival and renewed careers elsewhere." [1]

A group of "exceptionally talented researchers and physicians helped raise the fledging New England Medical Center - and with it  Tufts Medical School - to new emninence.” [2] These physicians "came to Boston because of their friendship with [Boston Dispenary Chief of Medicine] Dr. [Joseph] Pratt, joining what later became known as the German scientific brain drain." [2].