Individuals may consult most other Special Collections books, including manuscript facsimiles, in Tisch Library. These books may be used only in the library. Request them by their call numbers at the Digital Collections & Archives Reading Room on Level G, Monday-Friday 8 a.m. - 4 p.m. 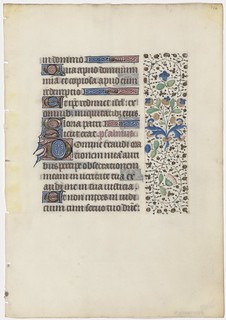 Leaf from a Book of Hours (France, ca. 15th Century) in the Tisch Miscellany.

The library also holds over two dozen fragments from manuscripts, early printed books, and fine press books donated in the 1950s and '60s. Tufts students in Art History and Medieval Latin have contributed transcriptions, translations, and commentaries for some pieces in the collection. A selection of images are online.

This material is not available for recall in the DCA reading room. Please contact the Curator of Rare Books.

Rare and valuable in their own right, facsimiles of medieval manuscripts are created by the most exacting techniques of modern printing to replicate the size and appearance of medieval manuscripts. Scholars in art history, literature, music, and history study facsimiles gain insights that cannot be gleaned from digital images - although such images, too, are important adjuncts to the study of medieval books. Facsimiles convey meaningful information about the content, artistic qualities, materials, size, heft, colors, and binding techniques of the medieval codex.

At the time of this guide update (October '17) there no longer is an easy way of finding facsimiles in the Tufts catalog. An advanced search in which the subject contains "manuscripts" and "facsimiles", with results facets "Tisch Library" and "books" checked, will bring up many relevant titles, but also many that are not.

Several facsimiles frequently called up for use in class:

Codex Etchmiadzin, a codex Gospel of supreme importance in the history, art, and culture of Armenia.

The Peterborough Bestiary, perhaps the finest compendium of the science and lore of animal life - real and mythical - in medieval England.

The Ellesmere Chaucer, regarded to be the most reliable early edition of Geoffrey Chaucer's Canterbury Tales

Das Mirandola-Stundenbuch, British Library, Manuscript. Add. 50002, a facsimile of the 15th Century book of hours made for Galeotto Pico, Prince of Mirandola.